Quality Centre 9 is not compatible with IE8, and Mercury is advising all their user to upgrade to latest version if you need to use it with windows 7 / IE 8. This tutorial will help you in opening Quality centre 9 on Windows7 without upgrading apying new license cost.

2. Open Quality centre URL and click below icon to run it is Compatibility Mode —

3. Then you will get following prompt to install Add on. Click On Prompt and install the add on.

END_OF_DOCUMENT_TOKEN_TO_BE_REPLACED

Many of you might be really big fans of James Bond A.K.A Mr.007. When we talk about gadgets and James bond we really mean a lot of gadgets because he never gets enough of his high tech gizmos. And for us, the fans, the gadgets are like holy devices. We will be talking about one of Bond’s latest gadgets the Sony Ericsson C902 Cyber Shot phone. Yes I know many of the scenes would have been clicked in your minds by now. For the Sci-fi freaks, even not fans of James Bond, this is a big feast to drool upon.

The C902 comes with the standard software of the Sony Ericsson Cybershot series. It features an internal storage space of 160 Mega Bytes. This is enough for a 100 full resolution pictures. The storage memory can be expanded through memory slot in the phone.  The memory slot supports M2-cards and can increase the storage to 8 GB of data. The phonebook also enables the storage of a lot of contacts and keeps the details of 30 dialed, received and missed calls each. This usually allows the common user to free as comfortable as ever.

The C902 Cybershot is built to be splash and dust resistant for usage in tough environments too. So that requires the protection of the camera too. For the protection of the lens C902 features a unique slide over cover which allows a sensor to enter the phone in photo mode on the slide of the cover. The Lens is of 5.0 Mega Pixel designed by Carl Zeiss. C902 is also unique to be the slimmest 5 MP camera phone ever. It also is integrated with auto focus or faces detection and also available is the internal LED flash light for photo sessions at night. Along with this are 8 illuminated camera orientated touch keys making picture taking as interesting as ever.

END_OF_DOCUMENT_TOKEN_TO_BE_REPLACED

First and foremost, since viruses, Trojans and other malware are a major concern for any computer connected to the internet; By a survey it is recorded that mostly virus hit your system with the increasing use of USB flash Memory, and new forms of viruses are always getting updated with passage of time, Even Viruses have changed their forms.

Now you can find a virus in  a jpg image also, which look so odd, They can attack your computer with a unknown news resource, or they can jam your system if you accidentally reach to a site which you don’t know, So safe browsing is the key to avoid such issues, one should be sufficiently prepared to defend one’s PC from such things by a good antivirus program.

There are plenty of proprietary antivirus vendors such as Symantec and McAfee that have been in the antivirus business for years. However, since purchasing their products cost a pretty penny and unless you continue to pay subscriptions to update your virus definitions the program essentially becomes crippled, this is not necessarily the best solution. There are several free antivirus programs available on the Web that are not only easy to use and update but also offer equally powerful protection.

END_OF_DOCUMENT_TOKEN_TO_BE_REPLACED

Continue ReadingDo you use an Updated Antivirus or not ?

Out of several new features of the new Window 7 taskbar, one of the very useful features associated with it is the capability to pin applications. There is application icon present on the task bar at any time whenever you access it. Instead of filling your desktop with several icons, browsing through the folders of program files or clicking on the Start Menu each time you want to access new application, with the help of new Window 7 taskbar you can access each application just with one click. You can pin application by following two ways: either you can drag and drop or right click on the icon.

Pinning application to the Windows 7 using the method of drag and drop: 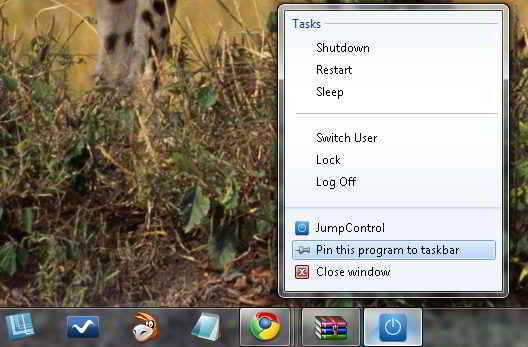